Navigate thru all the sub categories of the website

The Canadian Soldiers played a big part in freeing Belgium during World War I.  The battle ground was near Brussels, Belgium.  The people who live near Brussels hold a Remembrance Day Service three hundred and sixty-five days a year to show how grateful they are to the Canadian Soldiers.  My son, David Bragg, visited the battlefields and attended a service.
For many years the Municipality has been naming streets in West St. Paul after our Veterans.  Thanks to our Council, in 2019 new blue street signs bearing the Veteran’s name along with a poppy were erected.  Now people in our community know that the road or street was named after a Veteran.
CAO Brent Olynyk, Shannon Martin, MLA for McPhillips, Mayor Cheryl Christian, Bev Bragg, Councilors Dorothy Kleiber, Eleanor Link & Giorgio Busceti at the 2019 West St. Paul Remembrance Day Service
Private George Holland was killed in 1917 and we now have Holland Road which leads to the Sunova Centre.  Trooper Robert Holmes was killed during World War II in Normandy at the age of 23.  Holmes Road runs parallel to the Perimeter west of McPhillips.  His family has visited his grave in Normandy.  Private Roy Taylor was also killed in 1917.  Memorial plaques for Private Holland and Private Taylor are located in St. Paul’s Anglican Church. 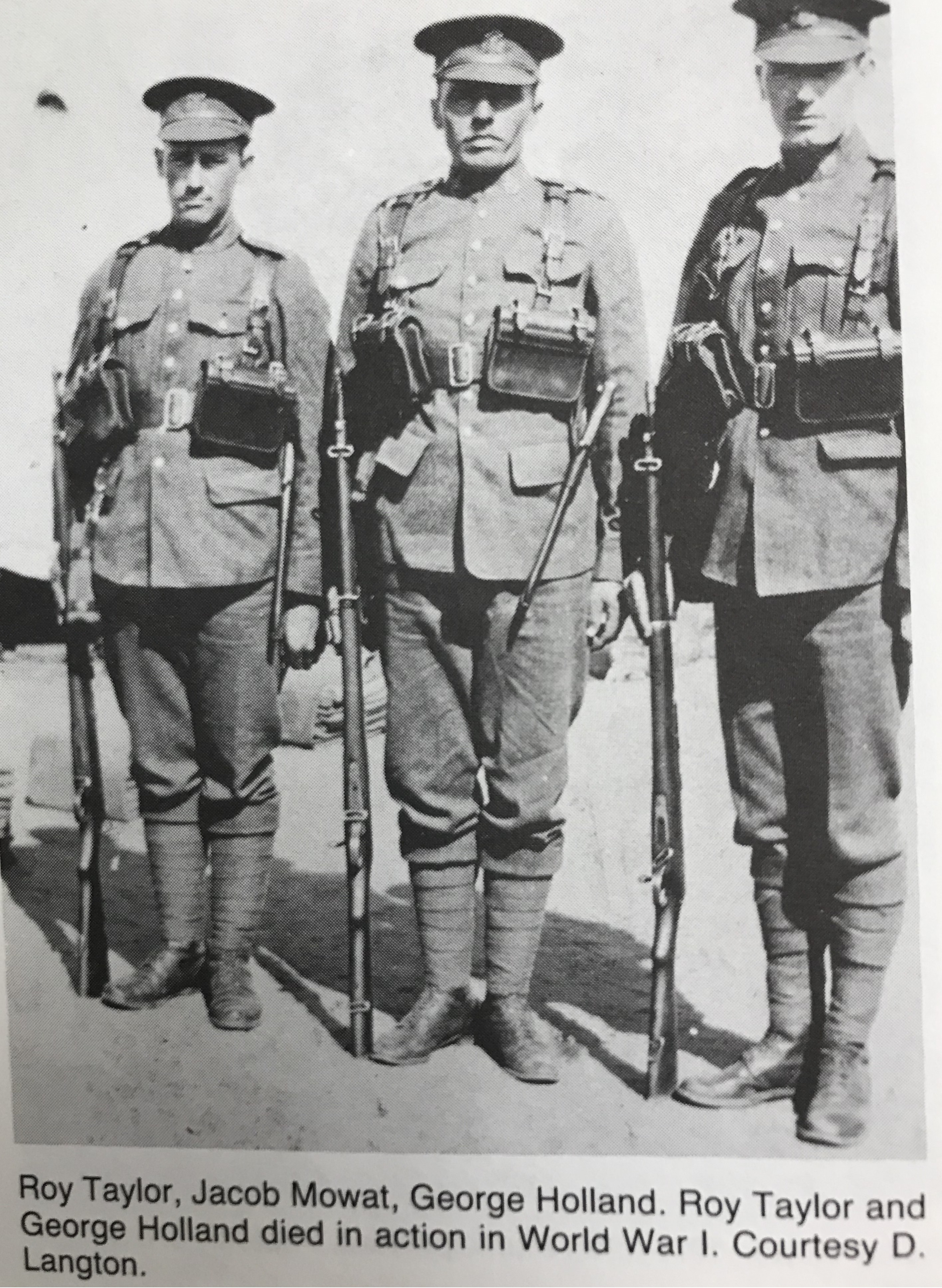 Antoine Vandal was one of our Metis Veterans that served in World War I.  The Canadian Government is now honoring the Metis Veterans this year.  During World War II many of those that enlisted were related, which certainly put a lot of stress on their families.  Antoine Vandal’s three sons and two son-in-laws served during World War II.  Antoine Vandal’s daughter Irene Byle was the oldest living resident, born and raised in West St. Paul.  Irene passed away September 19, 2020 at the age of 95.
My uncles Archibald Fyfe and Robert Anderson enlisted as well.  Archie Fyfe was in Holland in 1945 to help restore their country.  Upon arriving back to Canada my Uncle Archie received a letter from the Boar family, who lived in Holland, to thank him for his service.  Holland was liberated from the Germans on May 5, 1945 with help from Canadian Soldiers.  Two thousand Canadian Soldiers died in Holland and many are buried at Groesbeek Cemetery.  Robert Anderson served in England and Sicily.  He later became president of the Thompson Legion where he met Queen Elizabeth and Prince Phillip.

In 1943 West St. Paul had a Prisoner of War Camp at the corner of Grassmere and Poineda Road.  There were approximately three hundred and fifty German Soldiers and they helped farmers with their harvests.  They returned to Germany in 1945.  Another Prisoner of War Camp was located on the farm owned by Fred and Irene Byle north of Rushman Road.  These soldiers helped to harvest sugar beets. They returned to Germany in 1946. 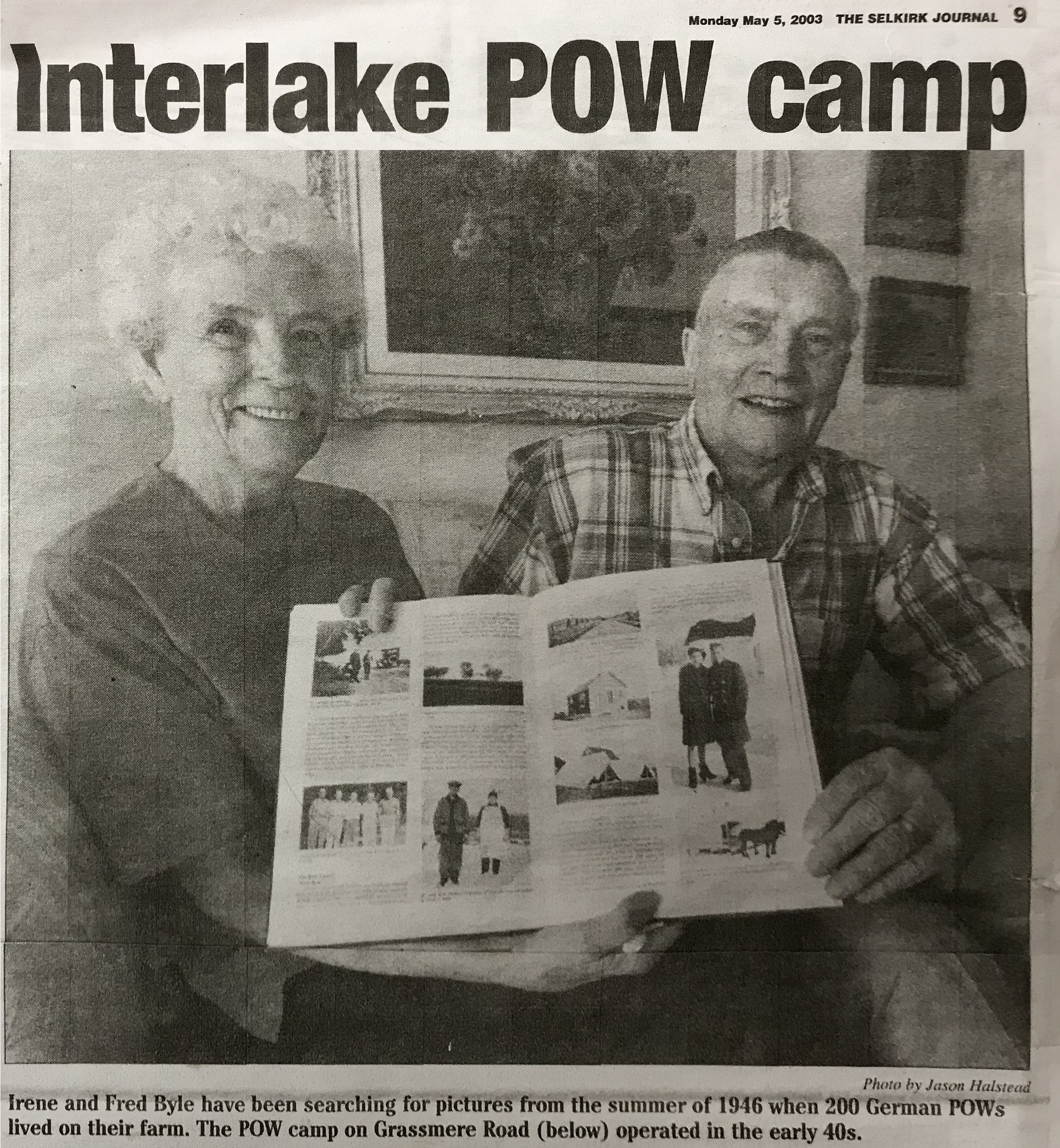 May 8, 1945 was the last day of World War II in the United Kingdom.  This year a ceremony was held in front of Buckingham Palace to commemorate the 75th anniversary.  August 6, 2020 marked the 75th anniversary of the bombing of Hiroshima.  The war in Japan ended on August 14, 1945.  The government of Japan later thanked the American government for ending the war as there would have been many more casualties had the war continued.
Many of our soldiers returned to West St. Paul from the war, but some also sacrificed their lives for our country.  Some Veterans that returned are buried at St. Paul’s Anglican Church.  The Municipal Hall was a big part of our soldiers’ lives.  This is where they attended school before enlisting.  When they returned they formed the Middlechurch Legion which was held upstairs.  The men and their families organized many activities at the legion.  Some of our Veterans formed the West St. Paul Fire Department.
Forty-five families moved to Rivercrest in 1946 during the original development of the community.  Only Veterans were allowed to purchase land through Veterans Affairs and build their homes in Rivercrest.  More land was available so additional families were able to move into the community later on during the Phase 2 development.
The Veterans played a big part in developing the community.  They built the Rivercrest Community Centre so people could gather together and enjoy many events.  Even though the Community Centre no longer stands, Rivercrest Park is still used and enjoyed by all in the area.  There is a monument that was erected in the park dedicated to Rivercrest Veterans.  This group of Veterans and their families also saw a need for a church so they built the Rivercrest United Church.  This church served all of West St. Paul in the past and is now a Child Care Facility.
Clifford Gow, a Navy Veteran, is the last living Veteran of Phase 2 still currently living in Rivercrest.  Donald Couch, who passed away on April 13, 2015, lived in Rivercrest for over sixty years.  One of the original Rivercrest Veteran’s families was the McCalders.  Doug McCalder was a prisoner of war in Germany from 1942-1945.  Their daughter Sharon Yackel served four years on Municipal Council and her son Ryan Yackel is our Fire Chief. 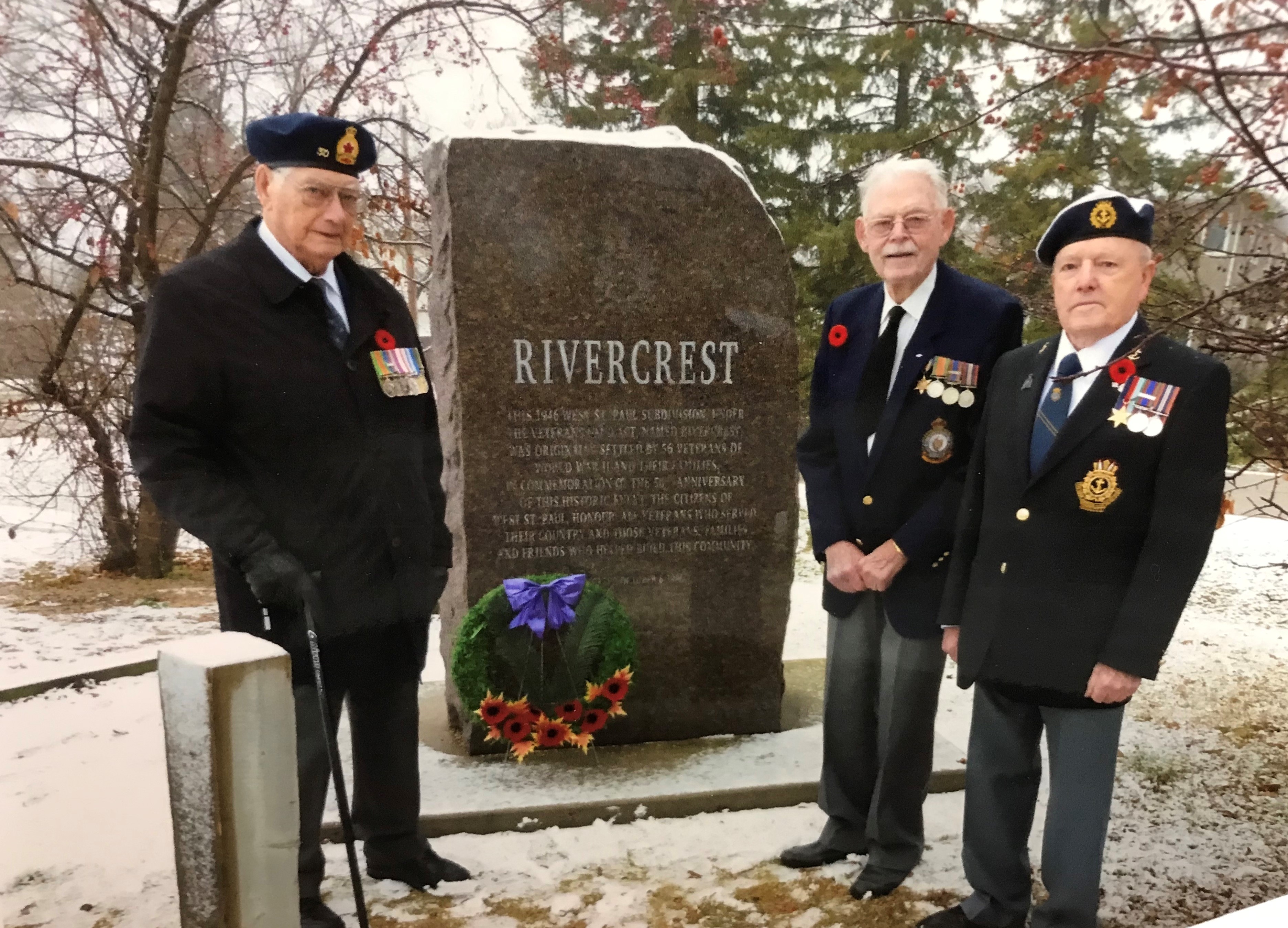 Arthur Christensen, Donald Couch and Clifford Gow at the monument in Rivercrest in 2013
Many of our Veterans were the founding fathers of this Municipality and deserve to be honoured.  Some served as Reeves and others as Councilors.  Roy Fulsher, who was awarded the Distinguished Flying Cross in 1943, became the Secretary/Treasurer for the Municipality and worked there for many years.
Mr. Art Christianson, contributed to the RM of West St. Paul as a Councilor and eventually the Reeve.  The park in Rivers Edge is named the Arthur E. Christensen Park in his honour.  Art was a member of the West Kildonan Legion for over seventy years and has been acknowledged by the Ottawa Veterans Office.  Art Christianson passed away on December 30, 2018 at the age of 102 at Middlechurch Home.
We need to teach our children and grandchildren about our Veterans and the important role that they played in the wars.  Many of our Veterans have second and third generations still living in West St. Paul.  We thank these Veterans for the sacrifices they made.
Rock of Remembrance designed and painted by West St. Paul Resident Sue Reyher

This is testing question template